Hannah is a bright and approachable saison with notes of straw, tangelo and grapefruit.

Eric Buist of Skagit Valley Malts reached out to us about this new variety of grain, similar to a wheat, that they were doing malting trials on with WSU. They had a single run of just 700 lbs and were holding the rest back for seed for the following year. Always eager to explore, we jumped on it and purchased the whole lot.

At first sip, Hannah may not strike you as a groundbreaking saison. There is a creamy mouthfeel that you might associate with soft white wheat, and notes of citrus with a hint of tartness expected of our house yeast culture. However, it’s the local economic and lasting environmental impact of Salish Blue what we are proud to be a part of.

Salish Blue is expected to take grain production into a new realm. Unlike most wheat species, Salish Blue is a perennial and once established, will grow back for multiple seasons. Farmers who plant Salish Blue won’t have to till their fields, spread seed and apply herbicide to get their wheat crops to emerge each season. Salish Blue holds soil moisture and nutrients more efficiently than traditional wheat. This promises to save farmers time and money on seeding costs and boost soil health.

Hannah and the malt Salish Blue, xTritipyrum aaseae, is named after Dr. Hannah Aase, who explored wheat genetics as a botanist and cell biologist at Washington State College, now WSU.

We’re excited to be the first and only brewery in Washington State using Salish Blue. 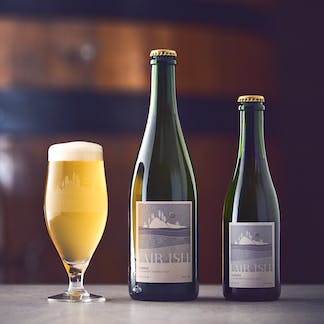