Li-Fi is a collaboration between Jester King in Austin, Texas and Creature Comforts Brewing Co. in Athens, Georgia.

Li-Fi is a 100% spontaneous fermented beer brewed with Texas malted barley and Georgia Dayspring wheat, barrel-aged for two and half years, dry hoped with Amarillo, and bottle conditioned for five months. Nearly three years of maturation went into this truly elegant beer reflective of the terroir of Georgia and the Texas Hill Country.

Li-Fi was brewed in early 2017. Wort chill overnight in their coolship and collected wild yeast and bacteria from the air. The wort then 100% spontaneously fermented in oak barrels, allowing the beer to mature and develop refinement and complexity in oak for two and half years. After blending, a fresh dry hop with Amarillo was added prior to bottle conditioning. Fresh citrus and floral character morphed into ripe fruit and funk. 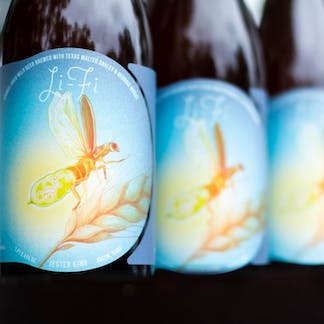