Roman is a dry-hopped golden saison based on a recipe from Pravda Brewery. For our adaptation, we used Washington grain from Skagit Valley malting, hops from Yakima Chief Hops and fermented with our house culture of feral and wild yeast and bacteria. Since water is such an important component of brewing, we also altered the chemistry of the water to mimic that of Lviv. The result is a golden saison dry-hopped with Hallertau Blanc presenting aromas of apricots and notes of grapefruit pith, wildflowers and honey.

On March 5th, Pravda Brewery announced their ‘Victory Beer Series” releasing the recipes and graphics for five of their beers. Today we are over five months into the war and nearly 500 brewers in North America have mashed in and donated proceeds to relief agencies. 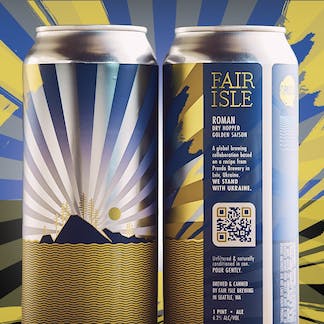